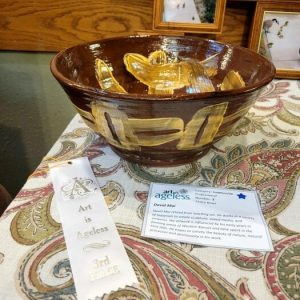 David Mai had heard about, and even attended, an Art is Ageless® exhibit in the past, but it wasn’t until just recently that he ever considered entering himself.

“I work with some other people, mostly senior citizens, at the Emporia Art Guild and they were talking about it, so I thought I’d just enter too,” said David.

It was a good decision.

And it all came as a huge surprise to David.

“I didn’t really know I had won anything until I went to pick up my work,” said David.

Even though he may have been a first-time participant in Art is Ageless, David is hardly a beginner at art. He is a trained ceramics artist who has a Master’s of Fine Arts from the University of Montana. In fact, it was art that brought David to Kansas in the first place.

“Forty years ago, I started doing artist in residence positions in Kansas. Once we ended up here in Emporia, I decided I’d get certified to teach because I like working with students,” said David.

As a result, David spent 20 years teaching elementary and high school students in Emporia and continues to teach ceramics at the Emporia Arts Council.

Despite his teaching schedule, David still finds time for his own work and, when asked, was pretty certain that he’ll enter Art is Ageless again next year.

And David would like to encourage other local artists who may be on the fence to consider entering as well.

“I think an important part of art is you’re creating it, but if you don’t show it to anybody it hasn’t really completed its purpose. You have to show it so people can see it and understand what you’re doing and get some inspiration from it,” said David.