Why one Kansas farmer exchanged bushels for brushes 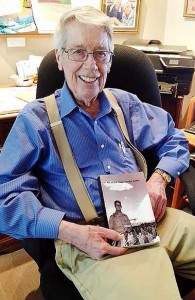 Omar Schartz was faced with a difficult decision when he married his wife, Jewell. Either pursue his passion as an artist, or pursue his profession as a farmer.

“I just couldn’t do both. My problem was that when I sat down to do artwork, time would pass by, and I wouldn’t even stop to eat. It was all-consuming. I was so engrossed in my painting.”

So Omar set down his paint brushes and pursued the more secure career choice to support his family—farming. Fortunately, he was fairly successful at that endeavor, and when the time came for him to hang up his tractor keys, he was happy to pick up his long-lost passion.

“I love to paint the things I remember as a farmer. I also enjoy western art and portraiture. I use almost all acrylic, although I’ve done some watercolor. I’m completely self-taught, though.”

While Omar no longer has his beloved Jewell, he cherishes the masterpieces they created together—their six children, and many grandchildren and great-grandchildren.

“I’m sad that I was never able to develop a market for my work, but my love of putting color on canvas surpasses any desire for money. And my family probably wouldn’t let me sell them anyway. They see them as heirlooms.”

Omar’s family not only places high value on Omar’s artwork, but the story behind the artwork as well. His daughters urged him to write his first book, “Paintings by a Kansas Farmer,” to capture his vision.

“I had no intentions of becoming an author. It’s kind of funny how that happened. My daughters told me we were going to Colorado to go skiing. On the way there, they pulled out pencils and notebooks, and said, ‘we’re going to write a book.’ So that’s what we did at Copper Mountain.”

But Omar’s authorship didn’t end there. Once again, his daughters helped him put together another book, this time, it was his memoir. And once again, it was something Omar hadn’t necessarily planned to do with his life.

“When I went to my last aunt’s funeral, I realized something. We just buried a lot of answers I’d never asked the questions to. So we wrote a book about what life was like on the farm. I didn’t want my grandchildren to wish down the road they had some way to find out about what grandpa did. I don’t care if I ever sell a book, but there’s nothing worse than trying to go back and reconstruct things.”

And if you want to know the story behind the title of his second book, “No More Homemade Butter,” he’ll tell you, “You have to read the book.”