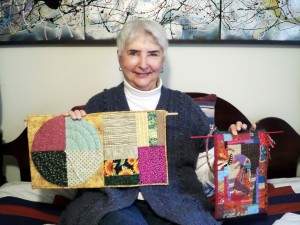 Every time Mary Burchill and her husband, Brower, would fly over western Kansas, Mary would study the patterns in the fields below.

“I always thought that would be a really neat quilt,” Mary said. “I finally figured out I didn’t have to make a big one. I could make a little one.”

That little quilt has gone on to big exposure, as the cover image of the 2014 Art is Ageless® calendar. “Center Pivot Irrigation” won first place in quilting in 2013. The circle evokes an irrigation field, with a string of beads to suggest water. Four other rectangles represent Kansas crops and plants, including wheat, sunflowers and even that pretty purple weed, henbit.

Mary spent about two weeks on the quilt once she had her concept in mind. “I looked at the materials differently than I would for a bed quilt,” she said. “I wanted these certain colors and fabrics to look like crops.”

Mary has been sewing for most of her life. She has a degree in clothing and textiles from the University of Kansas, and she makes all of her husband’s shirts – Western style. But it wasn’t until 10 years ago that she took up quilting. After Mary made bed quilts for their three children and three grandchildren, she searched for smaller projects because she enjoyed the process, but not the large scale.

“Quilts used to be made out of necessity, and you used your old clothes,” Mary said. “That’s hardly the way it is now.”

Mary and Brower have been married for 34 years and have lived at Lawrence Presbyterian Manor since 2000. Both worked at KU – Mary was associate director of the law library, and Brower was a zoology professor from 1968 to 1995, as well as associate vice chancellor for academic affairs.

After the Burchills retired, they became park rangers for another 10 years at Bandelier National Monument in New Mexico. Living in the Southwest inspired two more quilts for Mary. One depicts a Kokopelli, the dancing flute player; it placed in a previous Art is Ageless competition. The other was created for the Banned Books Week Trading Cards project at the Lawrence library. Mary’s piece was based on Rudolfo Anaya’s Bless Me, Ultima.

When the park would close for the winter, Mary and Brower would always return to Kansas, which surprised their friends in New Mexico. “I told them, ‘Well, they won’t move KU basketball down there,’” Mary said.