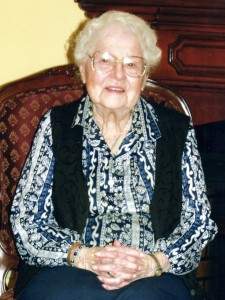 Alma Decker has been a friendly face at Clay Center Presbyterian Manor since 2005, when she and her husband, Ernest, moved in together. He passed away in 2010, and Alma has kept busy since then with a beautiful pastime — making intricately embroidered tea towels.

“Mother started embroidering towels as a teenager,” said Alma’s daughter, Marsha. “Her mother taught her at home, and while she tried to teach us children, we couldn’t do it quite as well as she could. She didn’t start doing it constantly until after daddy became ill. At 102 years old, she still practices her craft, even after breaking her hand a year or so ago. My brother, Gary, got her a magnifying light, which makes the detail work easier to see.”

“She mostly made towels to give as gifts, to kids and grandkids,” Marsha said. Alma has six grandchildren and 12 great-grandchildren. “There were two instances recently though where she ended up selling something. She submitted her work to the Art is Ageless® program, and one community member saw it displayed and asked if she could buy it. It reminded her of ones her grandmother used to make. Mother was surprised, but obliged.”

It wasn’t the first time Alma had been paid for her handiwork however.

“There was one time when a lady started a quilt to represent each state in the union. For the Kansas area, she wanted a sunflower, etc. She got discouraged and hired someone else to do it. That someone else then hired mother. We teased her that she had to be careful not to take too many coffee breaks while she was quilting, since she was on the clock,” Marsha said. “I never got to see the whole quilt, but judging from mother’s contribution alone, it must have been stunning. She really enjoyed doing it.”

Alma’s work has won several awards in the Art is Ageless program, including first place and honorable mention, all which took place after she’d turned 100. In addition to her sewing expertise, Marsha adds there’s something else people may not know about her mother.

“She was an identical twin and up until adolescence, nobody could tell her and her sister Alpa apart,” Marsha said. “They were the closest of friends for 96 years until auntie died. They kept the highway warm between Lincoln, where we lived, and Topeka, where she lived.”