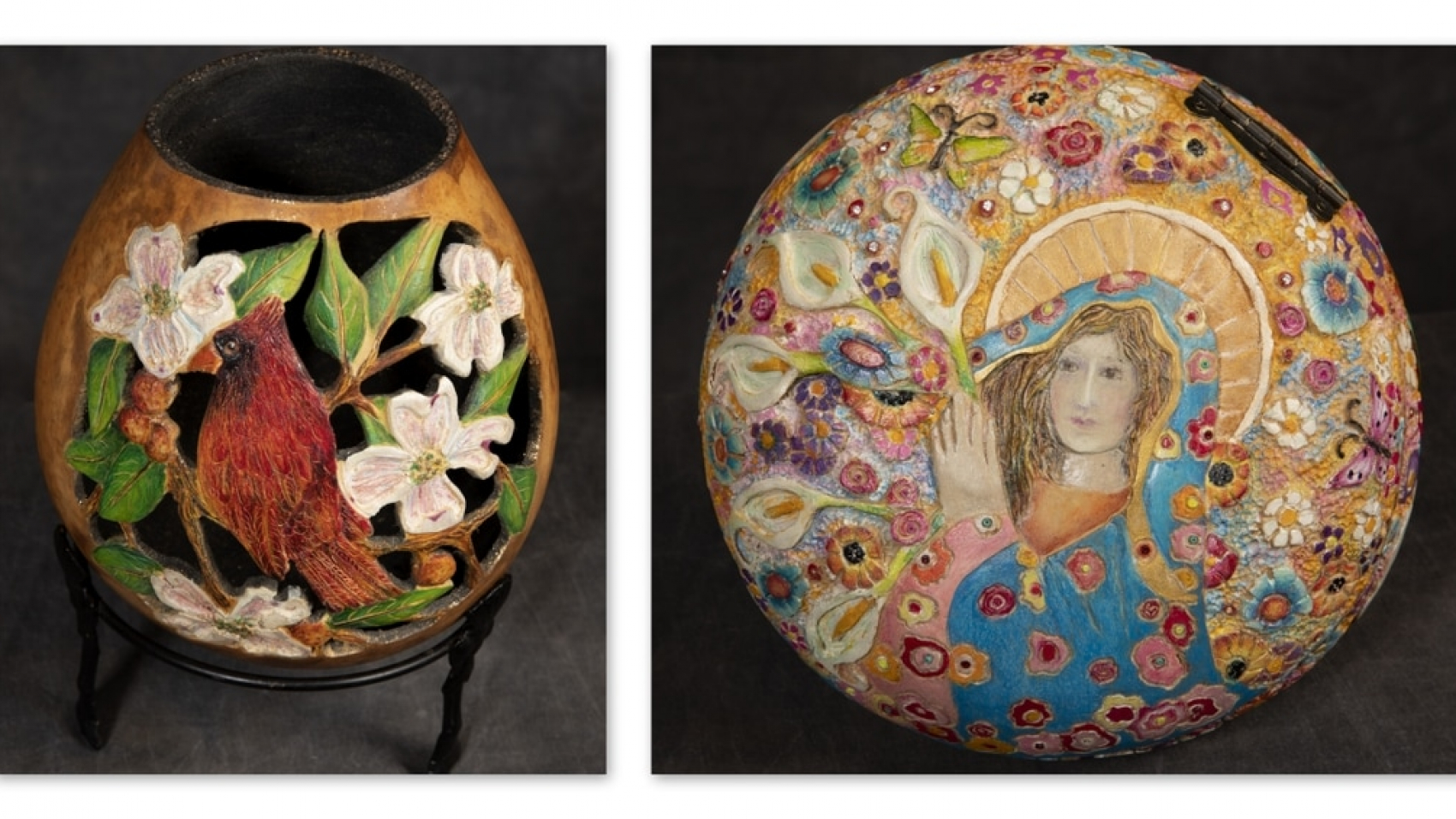 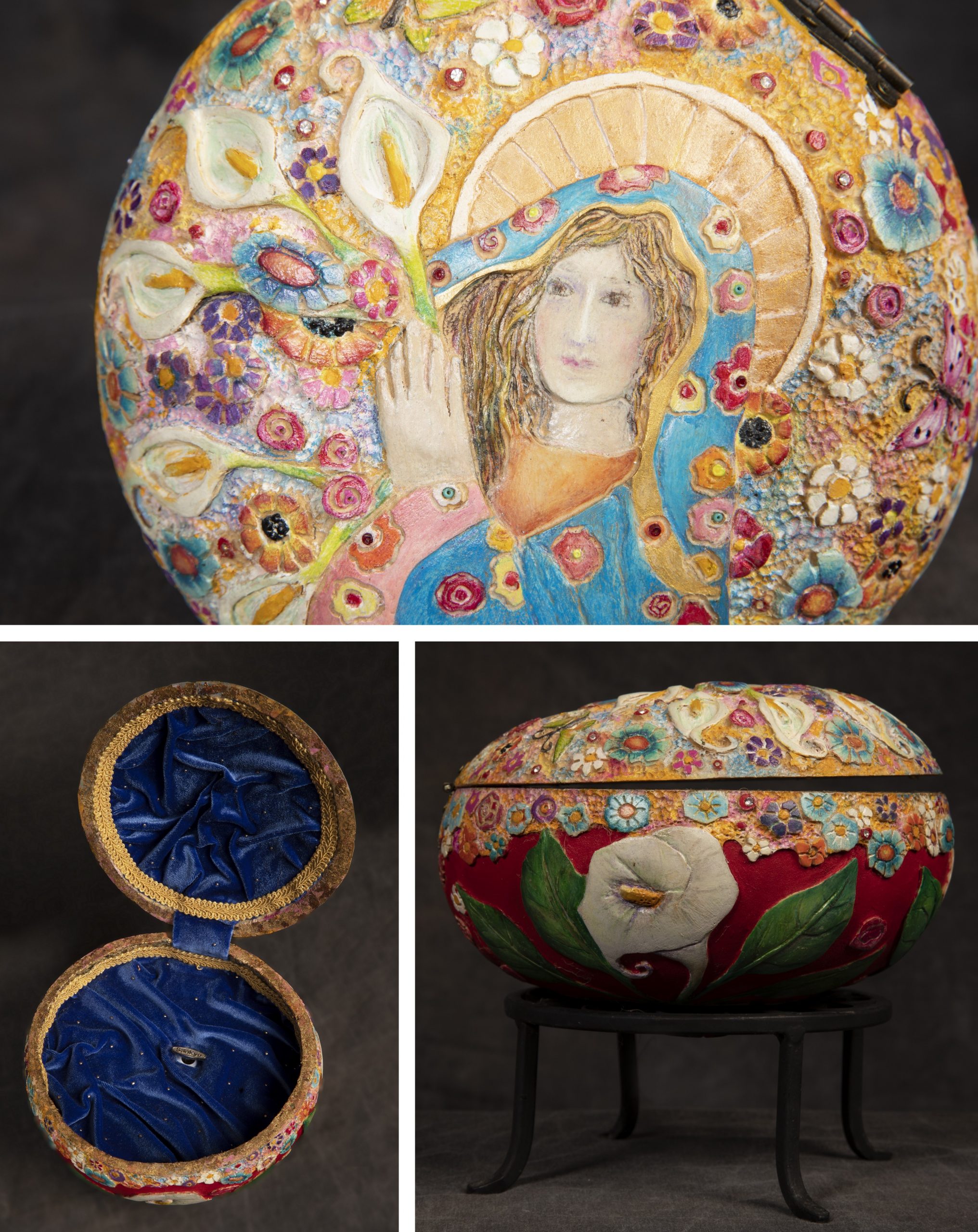 A photograph of “Ave Maria” is featured as part of the month of June in the 2022 Art Is Ageless calendar. It won first place in the sculpture/3D (professional) category in the 2021 local competition.

“One of the premises that has governed all my striving is a deep appreciation for beauty,” said Sophia deLaat, whose Art Is Ageless® entries have delighted Rolla Presbyterian Manor residents for the past six years.

Sophia finds beauty in an unusual medium: gourds. She turns these ancient vegetables into bowls, figurines, music boxes and lamps by carving intricate designs in their flesh.

“Each gourd has its own personality,” said Sophia, who will celebrate her 74th birthday this spring. “They are living things.”

You can’t impose your own ideas onto the gourd like you might make a painting by copying a photograph. She had a couple of different ideas for “Ave Maria,” which won first place in Rolla’s 2021 Art Is Ageless competition. Eventually, the right design revealed itself. A photograph of the intricate music box appears in the 2022 Art Is Ageless calendar. Another award winner, “Cardinal Direction” will be featured on one of the calendar’s pull-out postcards.

Sophia has been working with gourds since she discovered the art form about 10 years ago. She is a member of the Show-Me Gourd Society, the Missouri chapter of the American Gourd Society. They hold regular shows that include educational opportunities and exhibitions. At her first show, Sophia purchased a bushel gourd plant that yielded beautiful, enormous gourds that she has used in multiple pieces. 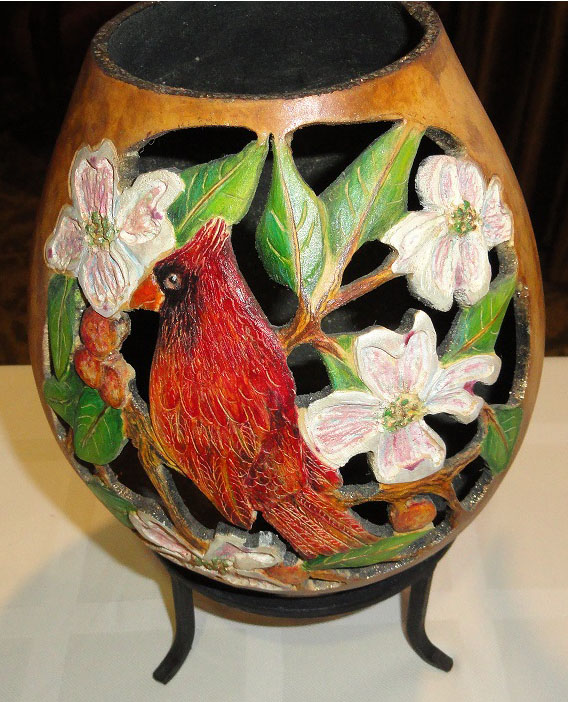 “Cardinal Direction” won first place in the mixed media/crafts (professional) category in the 2021 Art Is Ageless competition at Rolla Presbyterian Manor. It is featured on a pull-out postcard in the 2022 Art Is Ageless calendar.

Part of the joy of gourd art is the “amazingly supportive” community, she said.

Sophia uses a Dremel rotary tool to carve each gourd, then she applies a base coat of pastel ground. She uses colored pencils to bring the intricate design of each gourd to life. As a final touch, she often embellishes her gourds with inlaid Swarovski crystals.

Her work was included in “The Missouri 50” at the state fair this year. Missouri artists may submit two pieces for the competition, and both of Sophia’s were selected for the exclusive exhibition. She also exhibited two pieces in the 2019 iteration of the statewide arts showcase as well. Sophia has also won prizes Gourd Society shows across the country.

Sophia will exhibit her work in February in the gallery at The Centre in Rolla alongside three other artists. She took a break from making work because of a cancer diagnosis, so she has been busy getting ready for the group exhibition. She also posts images of her work on her Facebook page.

Rolla Presbyterian Manor remains one of her favorite places to show her work.

“I’m just so honored to be a part of Art Is Ageless,” Sophia said. “It’s a beautiful way of letting us older folks indulge our love of art.”