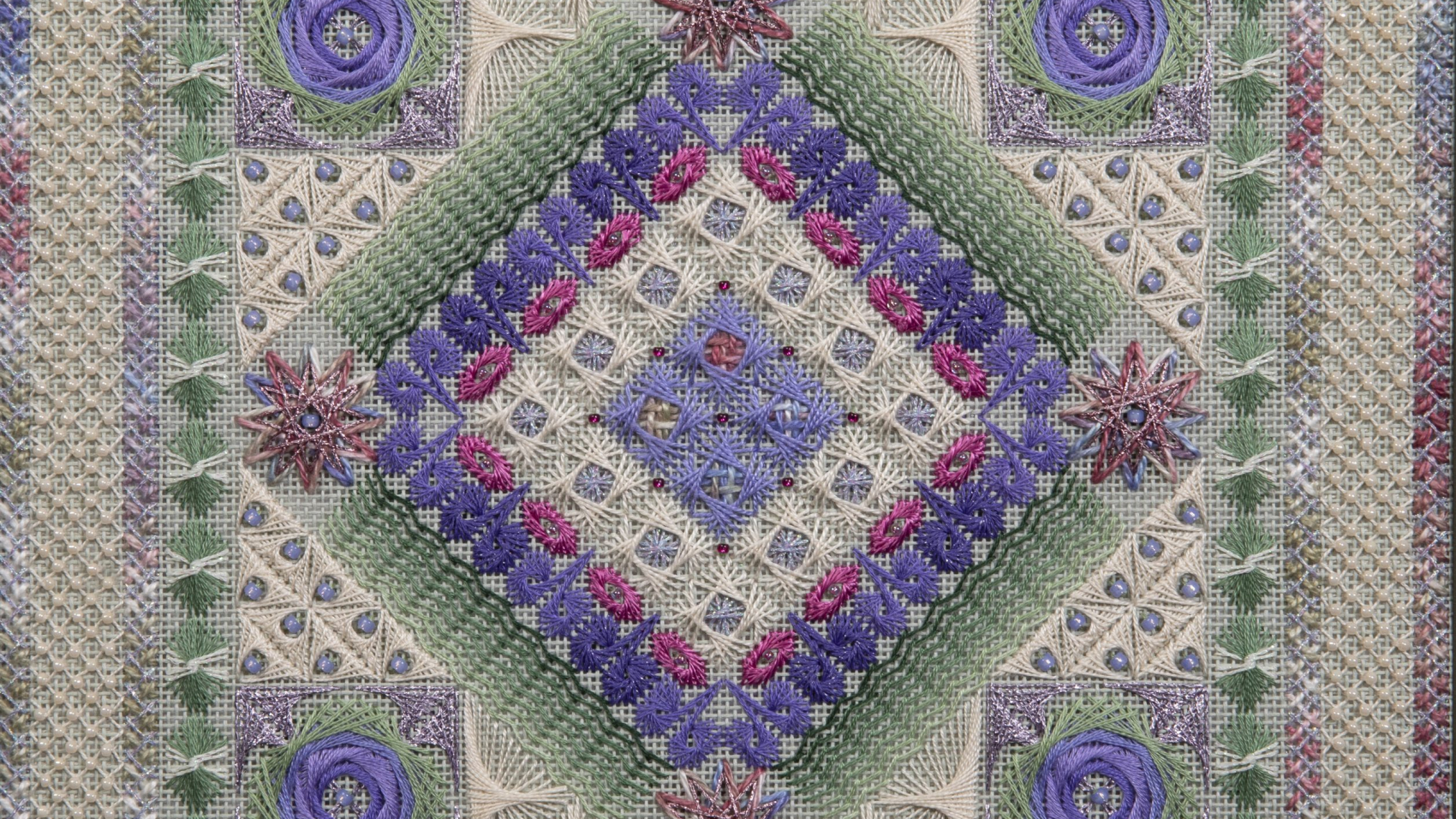 Aberdeen Village resident Jo Henderson taught herself to crochet and knit years ago. 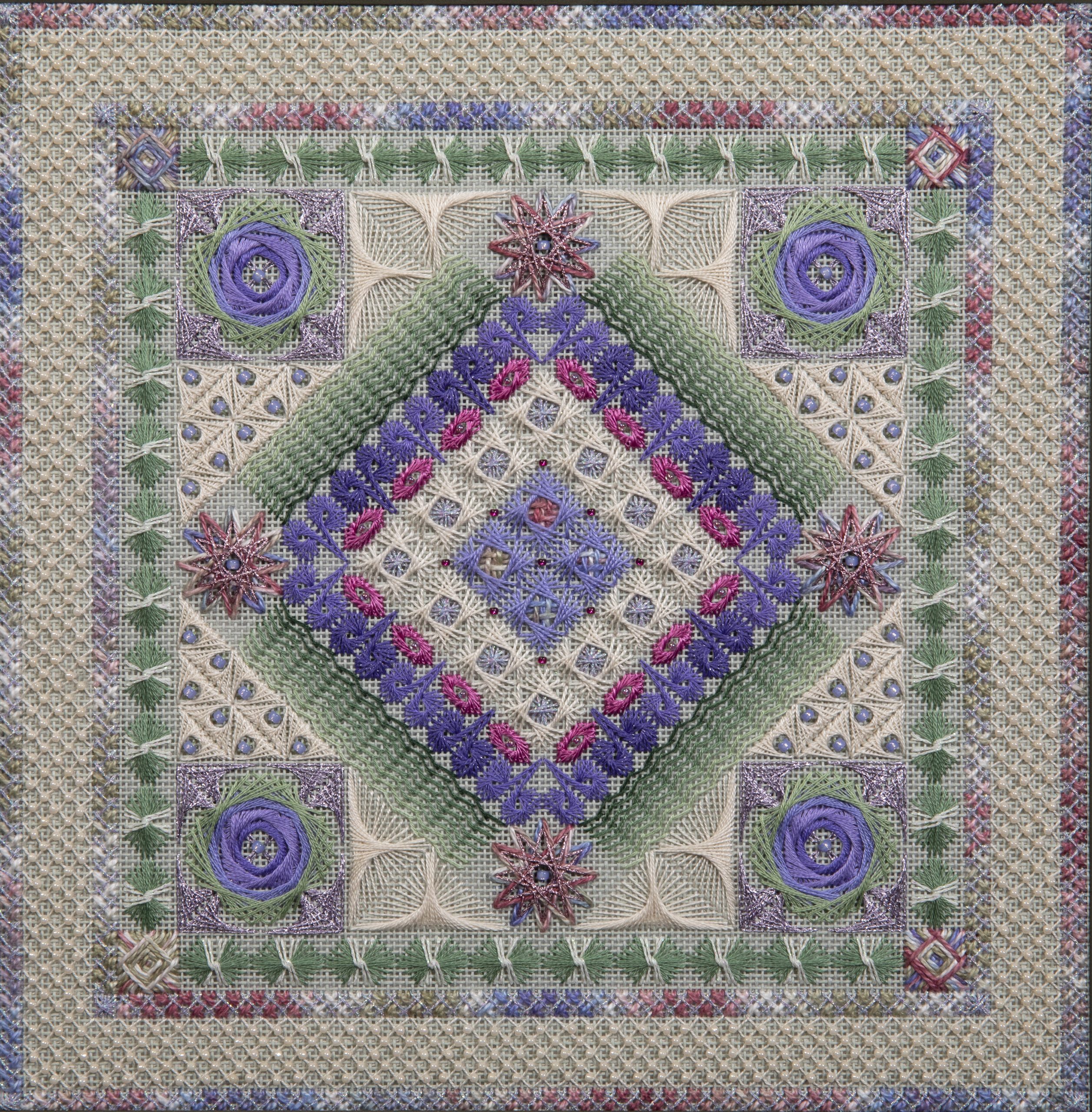 “But I didn’t care for it,” Jo said. “I tried needlepoint after buying a book and supplies while on turnaround in Australia. I liked it, but kids and life interfered until the early ’90s when I had more time. My husband encouraged my creativity, and then I discovered a needlepoint shop in El Dorado, Ark., when I lived in northern Louisiana. Kindred spirits sealed the deal!”

Now Jo’s talent has been recognized with a first and second place finish in the annual Art is Ageless® competition.

The first-place piece, “Tribute,” came from a class sponsored by the Greater Kansas City Needlepoint Guild, of which Jo is a member. Debbie Rowley, an accomplished national teacher and designer, led the class. The materials for the piece came with the two-and-a-half-day class.

“It is a creative combination of Jean Hilton stitches, colorful threads and beads,” Jo explained. “The second-place winner, ‘The Old Wooden Cross,’ was an original piece which was the fifth step in my journey to the Embroidery Guild of America’s Master Craftsman in Canvas designation. It was exhibited at the 2019 National Seminar of the Embroidery Guild of America in Saint Louis.” 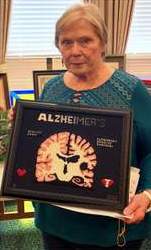 This isn’t Jo’s first time in Art is Ageless: She once entered a piece that depicted the differences between a normal brain and one afflicted by Alzheimer’s disease. It was later selected for a three-year traveling exhibit with the Embroidery Guild of America — one of only 50 such pieces selected.

In 2002, Jo began her journey to earn the Master Craftsman designation through the Embroidery Guild of America.

“My area is canvas, which is an even-weave product, meaning threads that are counted 10, 13, 14, 18, or 24 threads per inch in both directions,” Jo said. “The threads have been treated with a sizing which makes them fairly stiff. The judging criteria, where relevant, can include knowledge and application of the principles of color and design, interpretation of the design, workmanship, materials, technical excellence in stitch execution and/or technique involved, solving technical problems and accuracy in following directions. Submissions can be made in May or November. If a submission is not passed, if the errors can be fixed, then it can be resubmitted the following cycle. Sometimes life happens and the journey is interrupted. It can continue, though. Some people can make it happen in three or four years, others are unable.”

Six of her pieces will be shown at the national EGA seminar in Chicago this September.

In addition to EGA and the Kansas City guild, she’s a member of the Santa Fe Trails Guild and the American Needlepoint Guild.

A Mother’s Day card led to a blue ribbon in Rolla Presby ...